For peace and the right to refuge 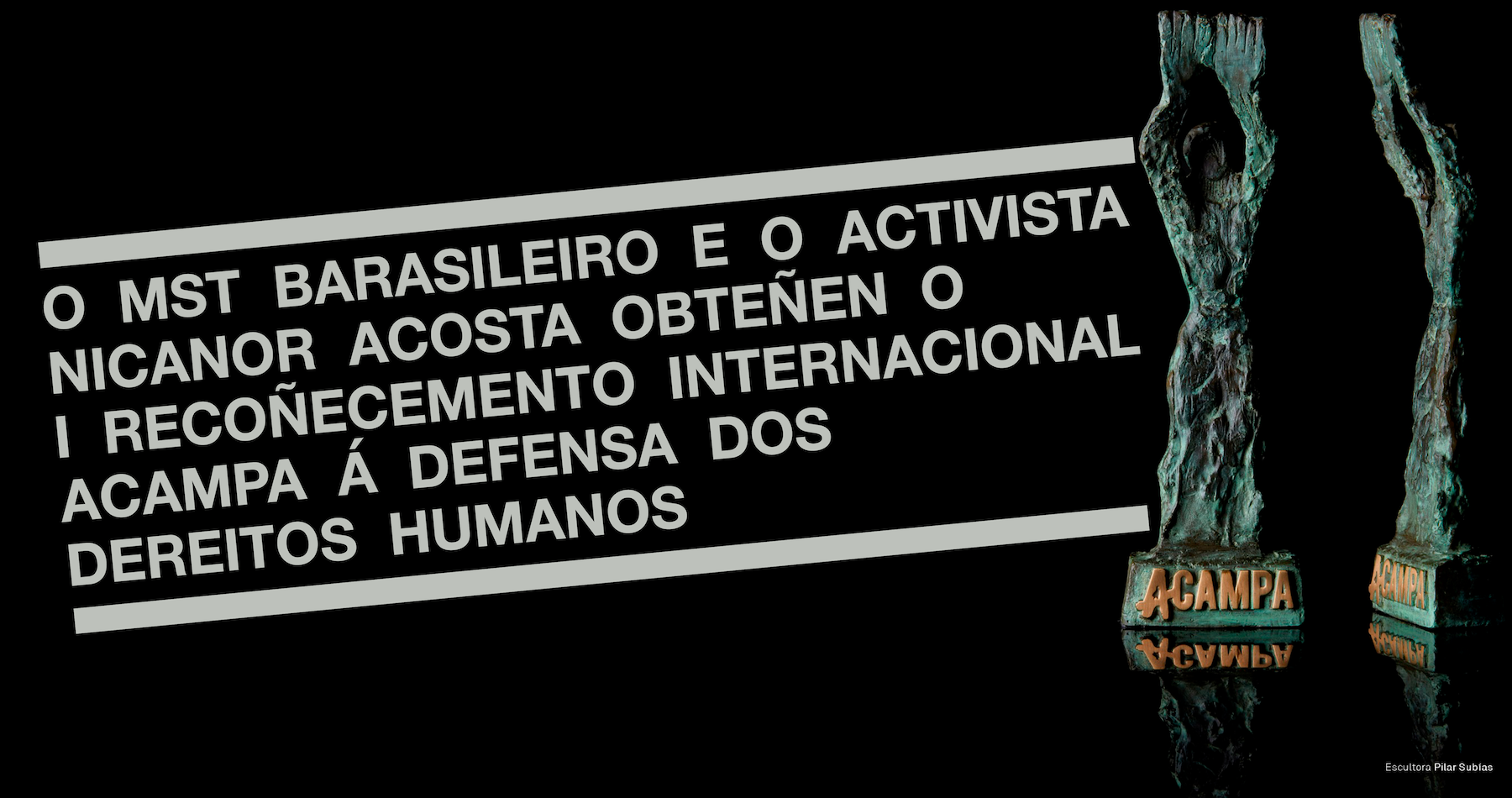 The Movimento dos Trabalhadores Sem Terra do Brasil, MST and the historic activist Nicanor Acosta were the most voted in the 1st International Recognition for the Defence of Human Rights.

The votes in each of the two categories – international and Galician – were secret, verifiable and open not only to people associated with the Acampa movement but also to the general public, who decided that the Brazilian MST, with 22.73% of the votes, and the activist Nicanor Acosta, from A Coruña, with 53.49%, were the first to receive the Acampa Recognition, which takes the form of an allegorical sculpture by the artist Pilar Subías.

Any of the candidates presented was, of course, deserving of our collective applause for their work and their work in the weaving of a more just and humane society. But the votes of the organisations, individuals associated with the network and the citizenry involved with Acampa chose the MST and Nicanor Acosta.

I International Recognition for the Defence of Human Rights

The MST is one of the most powerful social movements in Latin America. Since 1984, it has been defending Brazilians’ access to land, as enshrined in the Federal Constitution and the unfulfilled Agrarian Reform, promoting peaceful occupations and fostering functional civic and social structures in its encampments throughout the country, where hundreds of thousands of people live.

We hope that, pandemic reality permitting, it will be its Secretary General, João Pedro Stedile, who will collect the award in A Coruña during the V International Meeting Acampa por la Paz y el Derecho a Refugio 2021 to be held on 9, 10 and 11 September. 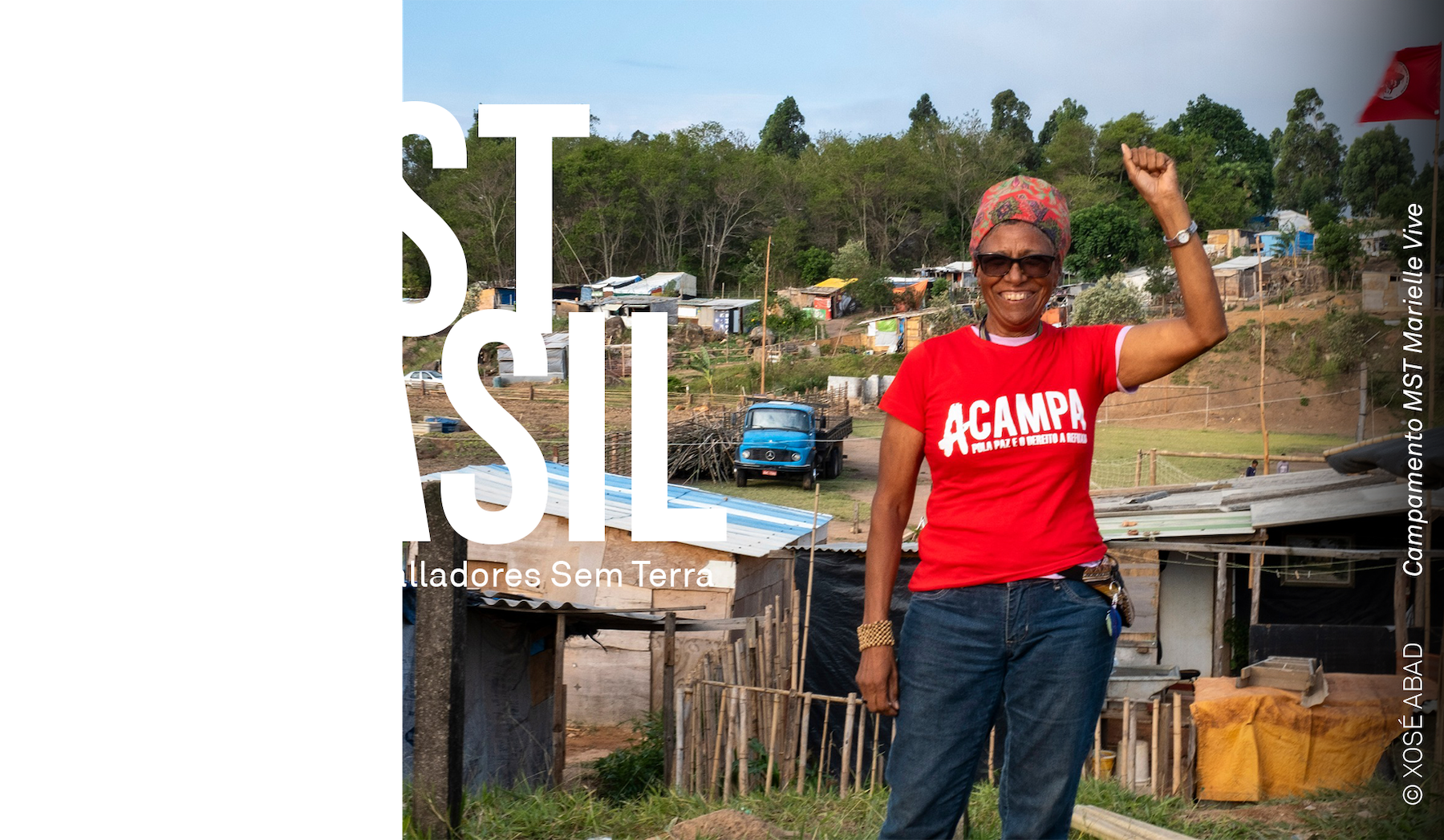 I Local Recognition (Galicia) for the Defence of Human Rights 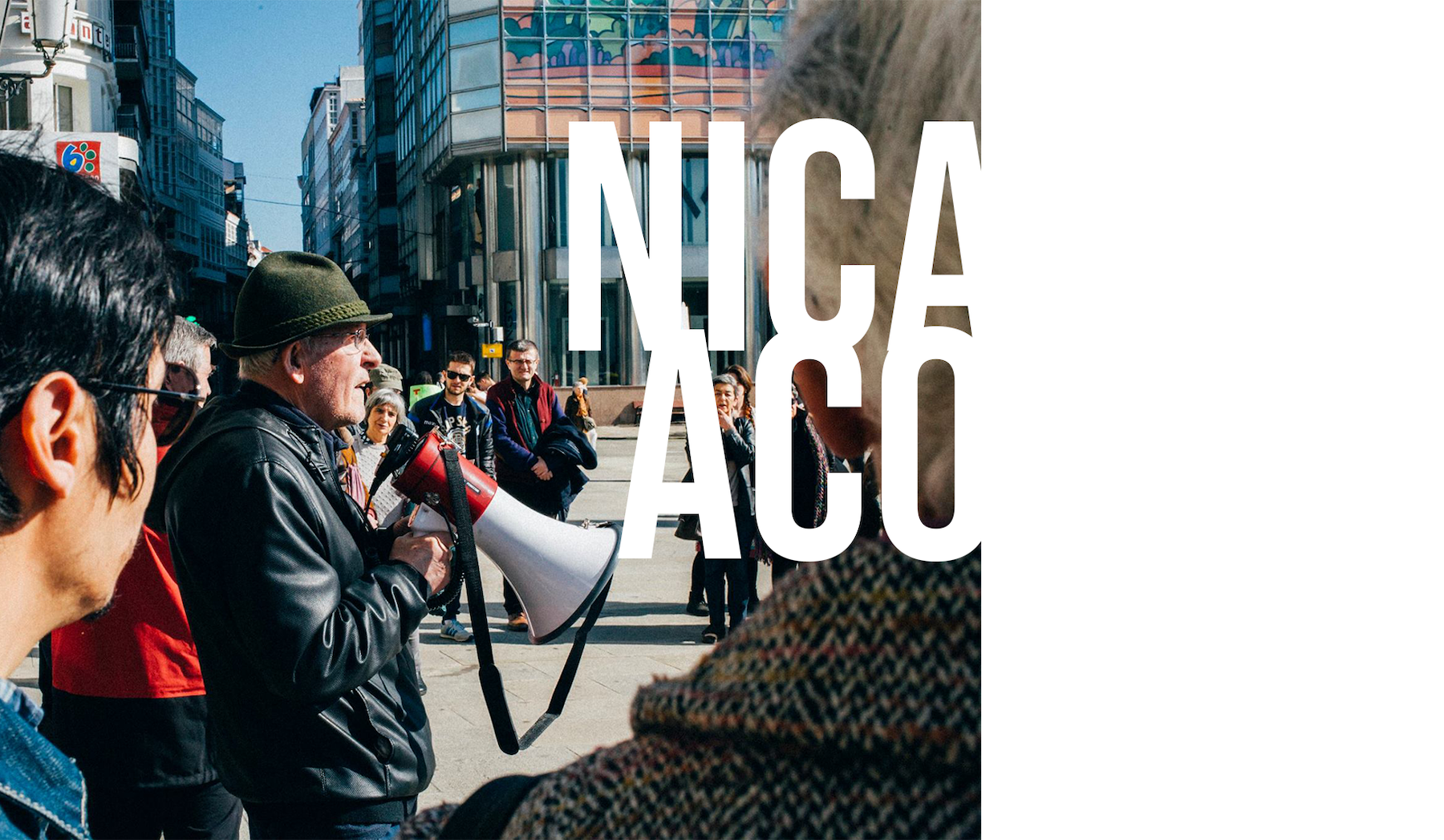 Nicanopr Acosta is a daily presence in every just cause that takes to the streets in A Coruña and Galicia. The voice of the activist Nicanor Acosta -82 years old- is always behind the loudspeaker of the claim in favour of the most disadvantaged.

An anti-Franco militant, he is the driving force behind the Festivities for Cultural Diversity in the Agra del Orzán neighbourhood, the Galician Immigration Forum and the first and second World March for Peace and Nonviolence (2009-2010).

He camped out in the 15M movement and led its demonstrations. He participated in Stop Evictions and organised the people affected by the preference shares scam. He is also the founder of the association Forum Propolis, whose premises are always available for meetings of many social movements, and where he frequently organises round tables on a wide range of current issues. Acosta participates in Vanguardia Obrera, Acampa por la Paz and many other causes.

The Acampa movement is pleased with the result. The objective of the recognition, to highlight the need for the defence of Human Rights, highlighting the work of organisations or people who are leaders in this field and who are an example for society as a whole, has been more than fulfilled with the results of the vote.

Here we leave you, in two donuts, the results achieved by each of the candidacies that competed for our I International Recognition Camp for Peace and the Right to Refuge: 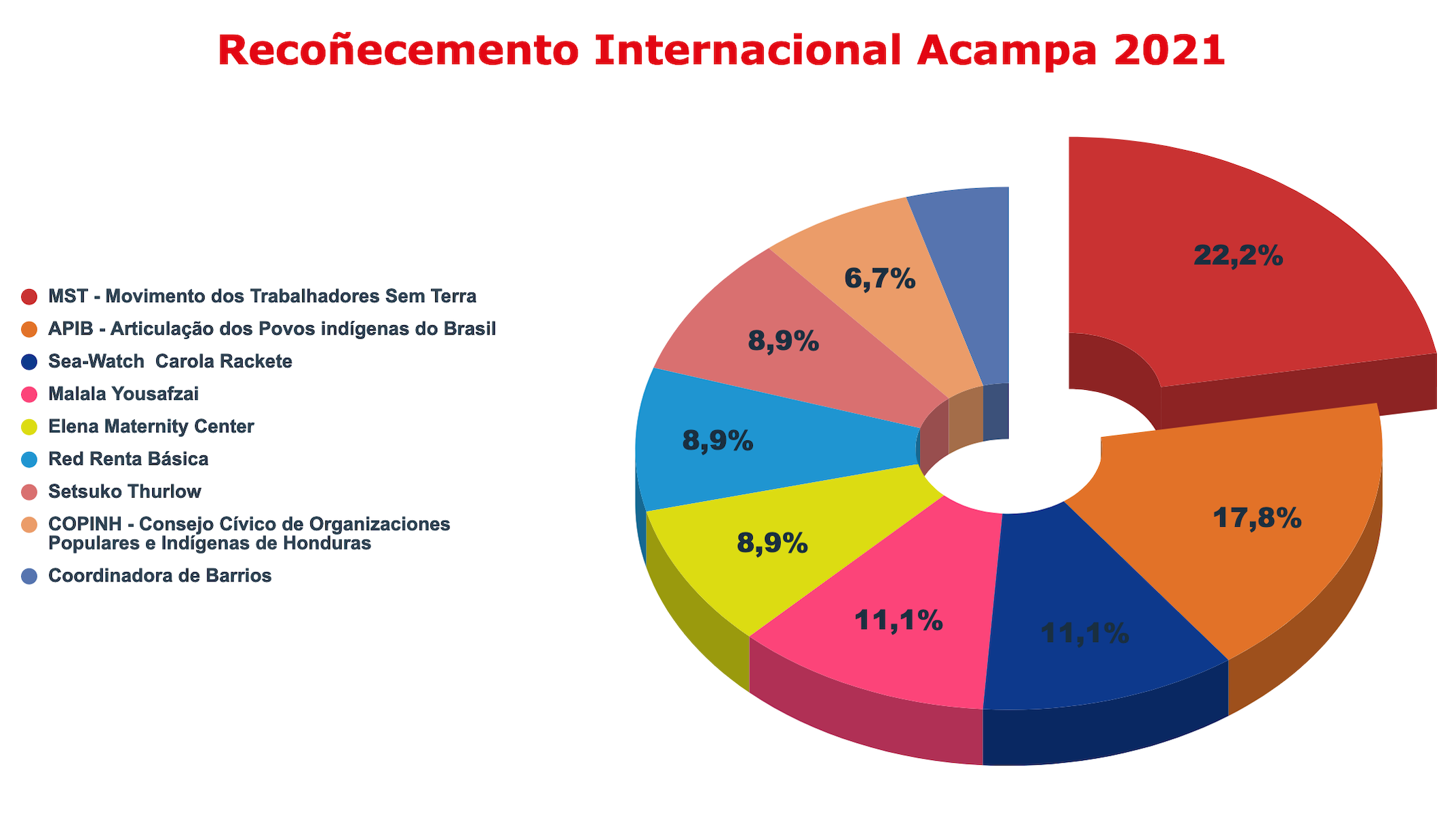 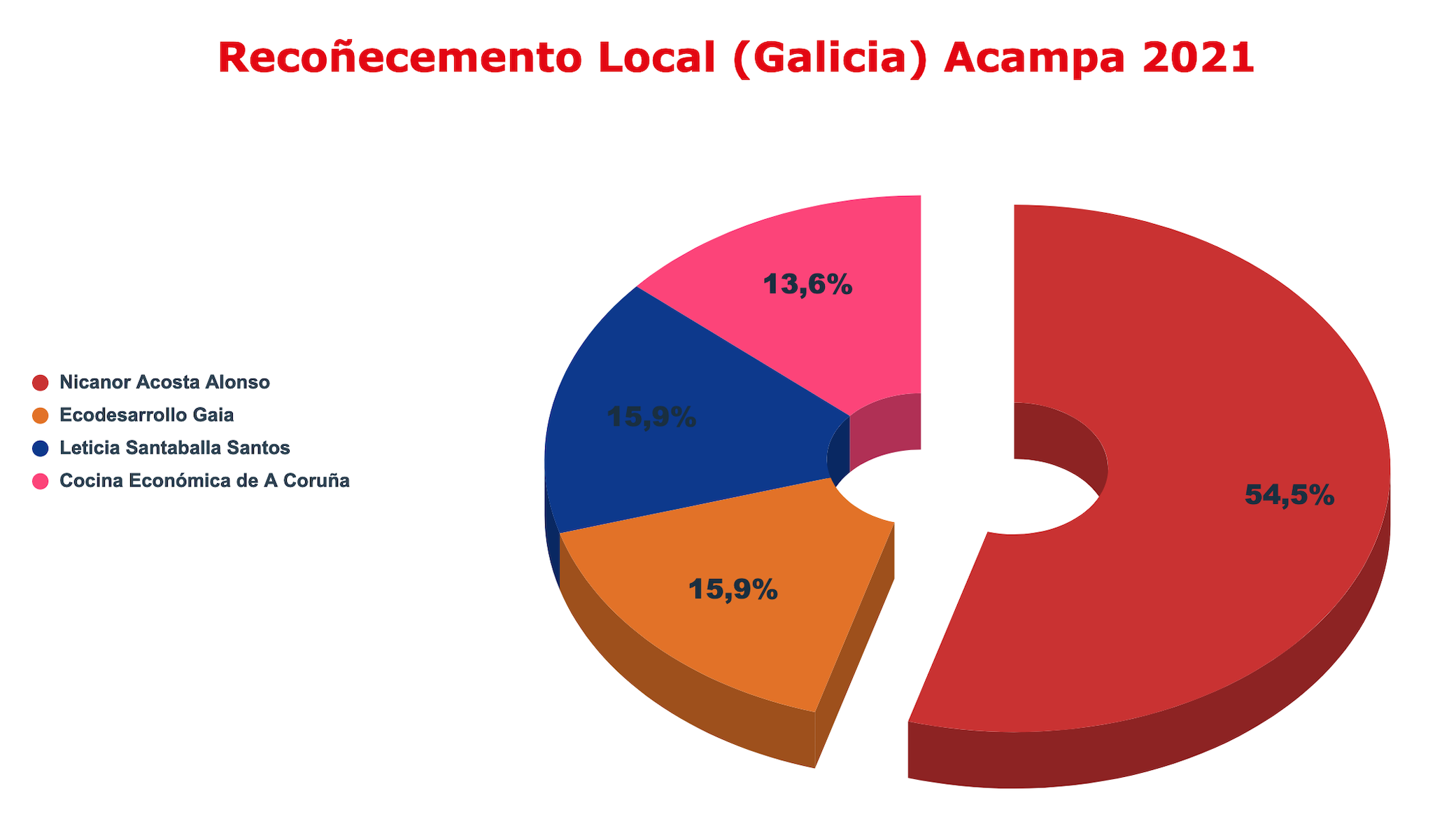 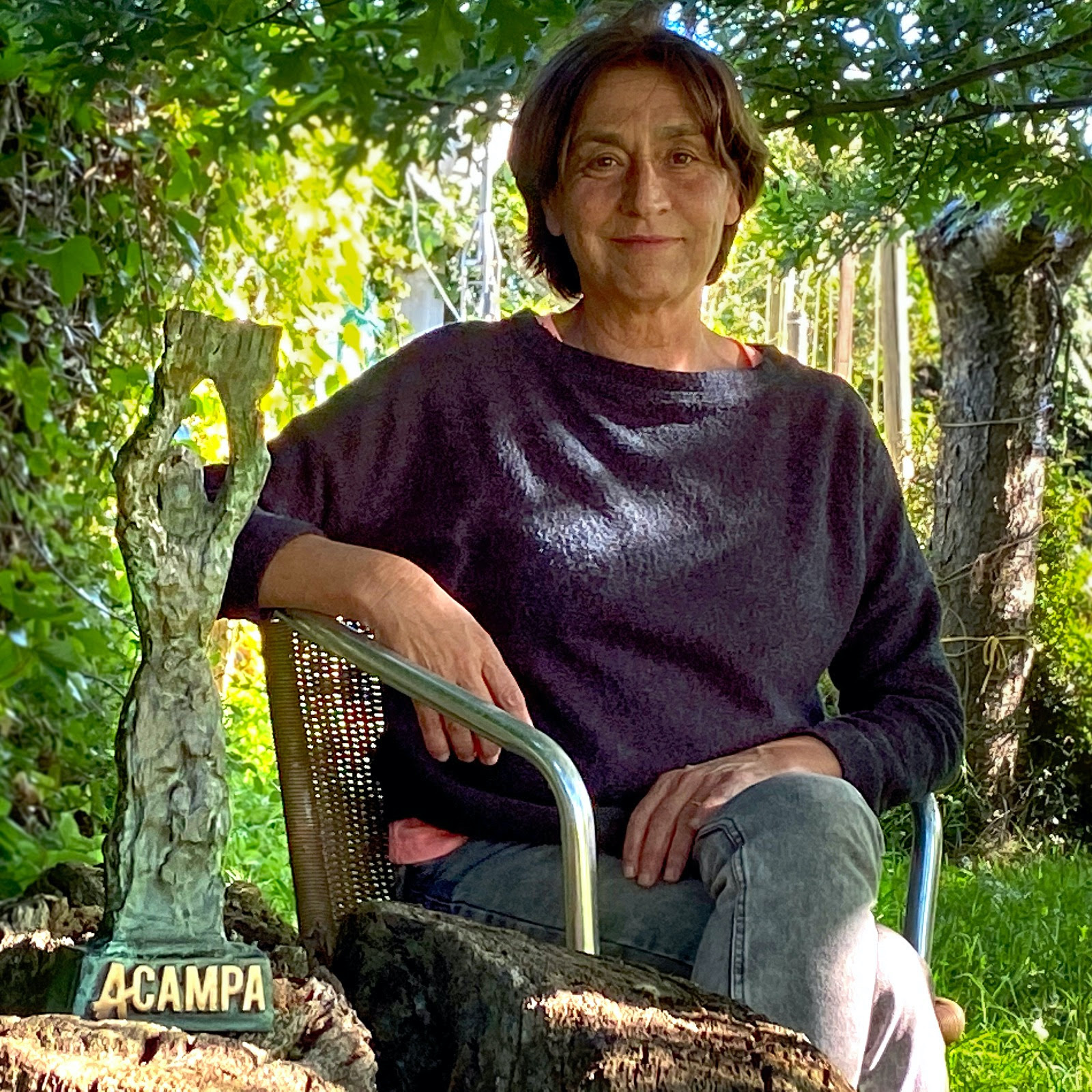 The sculptural piece that gives shape to the Recognition was created for this initiative by the artist Pilar Subías, to whom we are publicly grateful for the donation and the transfer of the rights to use it.

You can find out more about which cookies we are using or switch them off in settings.

This website uses cookies so that we can provide you with the best user experience possible. Cookie information is stored in your browser and performs functions such as recognising you when you return to our website and helping our team to understand which sections of the website you find most interesting and useful.

Strictly Necessary Cookie should be enabled at all times so that we can save your preferences for cookie settings.

If you disable this cookie, we will not be able to save your preferences. This means that every time you visit this website you will need to enable or disable cookies again.

This website uses Google Analytics to collect anonymous information such as the number of visitors to the site, and the most popular pages.

Please enable Strictly Necessary Cookies first so that we can save your preferences!